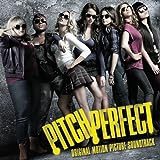 I’ve never sung in a collegiate a cappella group, and have no idea what it’s really like. That being said, I do have years of choral group experience to draw on for comparison. But, do you need any of that to enjoy the movie Pitch Perfect? No. Just a good sense of humor and an appreciation for modern pop music.

In case you haven’t heard of it, and I’m not surprised if you haven’t, there’s a new movie out called Pitch Perfect. It’s about college a cappella, the first year college experience, and taking risks.

It’s also fiction, so don’t take it too seriously. The boy gets the girl. The troubled youth defeats her inner demons. The underdog wins. Typical movie with a happy ending.

The real thrills came from the music. It was fun! Simply fun! Like the performances we saw on the three years of NBC’s The Sing-Off, there’s nothing quite like watching/hearing a group of singers using only their mouths and voices to perform creative arrangements of pop songs.

Simply put, I enjoyed Pitch Perfect. It was funny without being gross, and touching without being melodramatic. Go see it. It’ll be worth the ticket price. College a cappella is a genre of music that does not get the attention it deserves.

College a cappella is a genre of music that does not get the attention it deserves. It began with the Yale Whiffenpoofs in 1909, and it is set apart from barbershop and traditional choruses. The repertoire of most college a cappella groups consists of popular music, usually arranged by the members of the group or borrowed from other groups.

Unlike traditional a cappella songs that were written without instrumentation, the arrangements of popular songs interpret everything from guitar licks to keyboards using only the voice. There are several professional vocal bands (such as The Bobs), but most of the groups performing this style of music are centered in the college or university setting. One such group is University of Pennsylvania’s Penny Loafers. The co-ed group was founded in 1986 and have released several recordings on their own as well as being featured on compilation albums. In 1999, they were featured on the Best of College A Cappella. After listening to their 2005 album Side A, it is apparent that they have continued to produce solid arrangements of pop and rock songs.

The Penny Loafers’ Side A is impressive in that the arrangement and execution of most of the songs are spot on a cappella replicas of the originals. However, there are a few production issues that throw it off. Occasionally the levels for the vocals doing the instrumental bits are not balanced so that they blend into a uniform sound, and there is a tendency for them to overwhelm the lead vocal. An example of this is the beginning of “Don’t Leave Home.” Unlike the original performed by Dido, the sparseness of the intro is lost in the Penny Loafers’ arrangement due to the instrumental vocals being at the same level as the solo. They jump out at the listener in a way that they shouldn’t.

In contrast, “Take Me Out” blends everything just about right. Occasionally individual voices can be picked out, but otherwise it is a melodious blend of sounds that pay homage to Franz Ferdinand.

The best track on the CD is “Such Great Heights.” Given how well the group pulled off the Franz Ferdinand tune, it was no surprise that they would give the Postal Service’s song the same treatment. The original tune combines driving electronica with emo vocals that result in something almost zen-like. None of this power is lost in the Penny Loafers’ a cappella version. If anything, the impact of this song is enhanced in the new format.

You can view the full track listing as well as pick up a copy for yourself on the Penny Loafers website. The group is currently wrapping up work on a new album called Quicksand that will include songs originally performed by Kelly Clarkson, Snow Patrol, and Beck, just to name a few. For a taste of that, check out the video of the group performing Sia’s “Breath Me” live in concert.

It started one night a couple of months ago when I was cruising CD Baby for some music similar to The Bobs. I ended up buying two CDs: In Accord’s Departures and In the Buff’s Disturbing the Quiet Enjoyment of the Home. Then last week I was surfing the web and ran across a mention … END_OF_DOCUMENT_TOKEN_TO_BE_REPLACED

It started one night a couple of months ago when I was cruising CD Baby for some music similar to The Bobs. I ended up buying two CDs: In Accord’s Departures and In the Buff’s Disturbing the Quiet Enjoyment of the Home. Then last week I was surfing the web and ran across a mention of Grapevine, the women’s a cappella group at Swarthmore College. I ordered the CD and it’s been on regular rotation at work and at home. Now I’m hooked! I can’t get enough of this stuff! If you know of any other groups I should hear, please let me know.